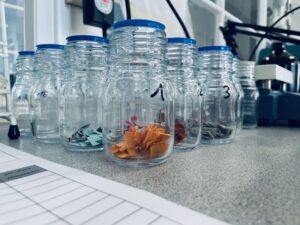 DIN EN ISO 14362-1 and DIN EN ISO 14362-3 define procedures to test for azo dyes that can release prohibited primary aromatic amines. In both procedures, the dyes are extracted and reduced and then the concentration of the amines is determined.

Dyeing textiles is a subject of its own and significantly more complex and difficult than it appears at first glance. The colours must be easy to use, they should be stable against light and other environmental influences and, of course, they must not wash out of the textile. And all this over a long period of use. This list of requirements is not easy to comply with. In particular, the type of dye used has a great influence on the properties. For a long time, so-called azo dyes were used. These are so called because they all have the chemical azo compound as a building block. This azo compound can be broken down, which does not happen in normal use but over a long time. Exposure to light or reductive stain remover slowly releases the resulting fragments. Many of these fragments consist of so-called primary aromatic amines, almost all of which are carcinogenic.

Legislators in the EU have restricted azo dyes for use in textiles through the REACH regulation, which is why a marketability test should include azo dyes. Because despite the ban, it is still possible that these dyes are used, either because regulation is not as thorough in other parts of the world or because a small amount of a banned dye has been used to refine the colour of the final textile.

The test is carried out according to DIN EN ISO 14362-1. The dyes and/or the amines are extracted and reduced in an aqueous citrate buffer. The amines are then dissolved in tert-butyl ether using an SPE column. The amount of solvent is reduced and the concentration of the amines is determined.

There are a few variables in this workup. The colours have to be extracted differently from different types of fibres. In addition, there are some amines that decompose further under the above conditions. To detect these, DIN EN ISO 14362-3 is used, which sets the pH differently during reduction and thus prevents further decomposition.

The test depends on the colour. If a product has many different colours, the number of samples increases.