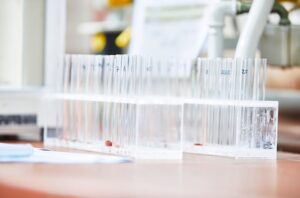 DIN EN ISO 14184-1 specifies a method by which free formaldehyde in textiles is extracted with water and the concentration is then determined photometrically.

Formaldehyde is a volatile small molecule that is particularly used in the use of resins and adhesives. In textiles, for example, protective clothing or non-iron shirts are known to contain formaldehyde. It is proven to be carcinogenic in the respiratory tract and limited to 75 mg/kg for clothing in the EU.

The testing for free formaldehyde including extraction is standardized according to DIN EN ISO 14184-1. CTL GmbH is accredited for this procedure. After cutting the sample to be tested, formaldehyde present in the textile is extracted with water. The extract is mixed with the so-called Nash reagent. This reacts with formaldehyde to a yellow color. The concentration in the extract can be determined photometrically and based on the weighed textile to the concentration in

The process can be used for any type of fibre and any type of textile. Fibers without special equipment rarely show high levels of formaldehyde. According to the standard, the limit of quantification is 16 mg/kg, at CTL GmbH we master the test up to 5 mg/kg.

Since formaldehyde is volatile, a sample should be tightly packed without air entrapment. Otherwise, the measured value can fluctuate considerably.