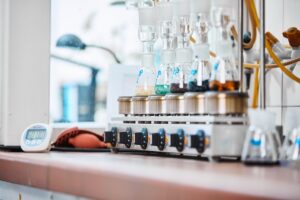 At least nonylphenol is restricted by law to 1000 mg/kg and nonylphenol ethoxylates to 100 mg/kg according to Regulation 1907/2006 (Reach) Annex XVII Entry 46. However, their use in production or refinement is not restricted. They only have to be separated and collected afterwards so that they are not released into the environment. This also means that simple post-washing is not allowed in the EU. A special process must be used to collect the wash water and capture the alkylphenols and alkylphenol ethoxylates. It is better and cheaper to be directly sure whether they are in there or not.

We test alkylphenols according to the standard DIN EN ISO 21084 and alkylphenol ethoxylates according to DIN EN ISO 18254-1. Both standards are similar in their processing, extraction is carried out in an ultrasonic bath and then the concentration of pollutant is determined in the extract. GC/MS, HPLC/DAD, HPCL/MS and other variants can be used.

It is not allowed in the EU to wash nonylphenol or nonylphenol ethoxylates out of textiles in normal laundry. The washing water must be collected and disposed of in a special way.